I watched this gem of a film last night and hate to say it, but it was my first time checking it out. A classic film and musical, directed by the late Bob Fosse, Cabaret was nominated (and won) many Academy Awards–losing Best Film to The Godfather. (Also a great film and amazing read.)

Unlike The Godfather, I haven’t read the original, short-story, novel version of Cabaret (yet). Goodbye to Berlin was written by Christopher Isherwood in the early 1930’s, as Germany morphed from a liberal, open, artistic city, into the breeding ground for the Third Reich. 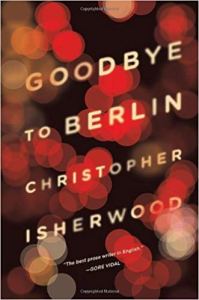 Now, if you go to IMDb and looked up Cabaret, the description reads, “A female girlie club entertainer in Weimar Republic era Berlin romances two men while the Nazi Party rises to power around them.”

And if you head over to GoodReads and check out Goodbye to Berlin, it reads, “In linked short stories, he says goodbye to Sally Bowles, to Fraulein Schroeder, to pranksters, perverts, political manipulators; to the very, very guilty and to the dwindling band of innocents. It is goodbye to a Berlin wild, wicked, breathtaking, decadent beyond belief and already – in the years between the wars – welcoming death in through the door, though more with a wink than a whimper.”

GoodReads description is much more accurate than the Hollywood neutralization of the film. In 1972, the war had only been over for 27 years. The deep cut of what took place was still felt by many, in a way, only first hand survivors can relive. (Unlike now, where it’s all text books and films to remind us of the horrors of WW2.)

in 1931–as Isherwood lived in the slow absorption of nazism in Berlin–watching the wild and decadent city he loved so much, become the backdrop for hate and horrors. When the book was published in 1934–American talked about these sort of things in comments quickly forgotten as they dealt with more important, local, issues–like the great depression.

But, the great depression was everywhere–not just in America. Which is also seen in Cabaret. The divide between Rich and Poor.

Now, as a writer–Showing vs Telling comes up a LOT. Personally, I feel both are needed from time to time. Sometimes, we need to tell our audience things–so we can get onto our next great Showy part. This is a personal opinion, and–if you’ve ever submitted a query to any agent in all the literary land–you probably have learned that, “Opinions are subjective,” and very from agent to agent. So, while you may not agree with me on the combination of the two–that’s okay!

But, back to Cabaret. As I watched the film last night, the story unfolds about the relationship between Sally Bowles (Liza Minnelli) and Brian Roberts (Michael York.) Each pivotal moment being punctuated by a musical number at the Cabaret Miss Bowles works at. As you follow them along their complicated relationship, you watch the world around them transform: from the opening, mirrored credits, to the final mirrored ending.

Never once do they say: Sally is hungry. Instead, each time there is food, she pounces on it. They never say, Sally is poor, but she wears the same clothes over and over again.

They never SAY directly, what is happening in Berlin. But you see Nazi uniforms arrive, at first, getting kicked out of the Cabaret–later, in larger and larger numbers. The blood and violence grows in time with tension of Sally and Brian’s unconventional relationship–until it all comes to a head and pops.

Now, for a writer of short stories and books–I’m a rather visual person. I enjoy watching and seeing stories as much as I do reading them, which is why I’m suggesting Cabaret as a successful example of Showing a major transformation, rather than simply saying, “This happens and this and then a little more of this.” Is it possible to execute the same effect on the page? I really do think so. It’s hard to get away from Telling your stories, at first. But that’s what editing is for. Second, third, and fourth drafts are where the true magic happens–when you take a story you’ve told and mold it into a cacophony of sound, tastes, and textures. Overloading more senses than the eyes–adding depth to your words, your surroundings–and really capturing the essence of a story all the way into its bones.

I mean, that’s the real different between showing and telling, isn’t it? In one you’re saying–IT WAS JUST LIKE THIS. In the other, you’re hinting to what it’s like with thread barren shirt cuffs, unwashed sheets, the copper scent of blood; boots on pavement that rattle up your spin, laughter so thick its contagious, and more and more and more.

If you haven’t seen Cabaret–it’s free on Netflix (and most certainly available at your local library.) I recommend it on many levels–for Showing vs Telling, Character development, a world slipping in the background. It’s a real treat, and deserved all the awards it won back in 1973.

Now, go enjoy a good film while I start reading, Goodbye Berlin–which I hope to blog about soon. (Or now. Who knows. Only time will tell…)