I’ve been writing for years–more than I care to share on days, because my ego takes hold and I feel like a failure.. I know how bad that sounds, but if you write, than I’m sure you know what I’m talking about.

Will I quit? I’ve tried and failed at that as well–so I suppose I’ll keep going until I succeed.

You’re probably wondering what this has to do with an astronaut playing the guitar in the international space station–but it is because of this astronaut (Commander Chris Hadfield) that I decided to write this post.

Back on September 14th I took my seven-year-old son to see Commander Hadfield talk about his new children’s book, THE DARKEST DARK. 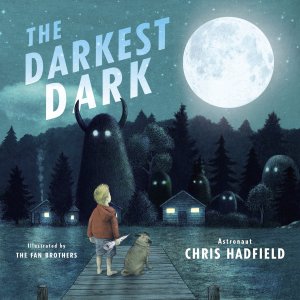 This is his first children’s book and is about when he decided to become an astronaut. Intended for small children–the picture book speaks about overcoming your fears to reach your goals.

I saw next to my child in an over stuffed hall of a catholic church as Chris Hadfield paced up and down the center row–a lot of the times stopping next to my son’s chair.

Mr. Hadfield read his book, spoke about growing up in rural Canada. A country that, at the time, didn’t have a space program. He spoke about deciding that he would figure out a way to get into space–and he did.

You have to read more, write more, ask more questions, endure more rejection, but attempt to continue that journey.

At the end of the night, after Mr. Hadfield shared his life and book with us, the floor was opened to questions and answers. A father of two little girls asked what advice Mr. Hadfield could give the children in the room about finding the path to success. Hadfield said this, (I’m paraphrasing), “Go to your local library (or book store) and see what sections you gravitate to. Chances are you end up in the same sections each time. These topics are the things we find passion in when no one else is telling us what to do. Now, pick the one you’re most passionate about and make the conscious decision to go after it.

Pick an end goal, and then work to it. You’re end goal may take years, but say, ‘this weekend I’m going to do [this] to work toward that goal.”

I decided a long time ago that I wanted to be a published author, but hearing those words reminded me of all the things I’ve done to work towards  that goal thus far. Yes, my end goal is still in the future–but giving up really isn’t an option. It’s not, because quiting the only true way to fail–and I’m not a failure.

So, in closing–inspiration is everywhere. Sometimes it’s on twitter talking to other inspiring authors, or on facebook in the form of a writing group, and sometimes it’s in the hall of a catholic church listening to the first ever Canadian Commander of the International Space Station say, “Remember, my goal was to walk on the moon. I’m a failure, I’ve never done that. I’ve only been in space 3 times and lived in the space station for six months.”

Keep on writing. And as a little bit of fun, enjoy this video of Commander Hadfield singing and playing David Bowie’s, SPACE ODDITY.