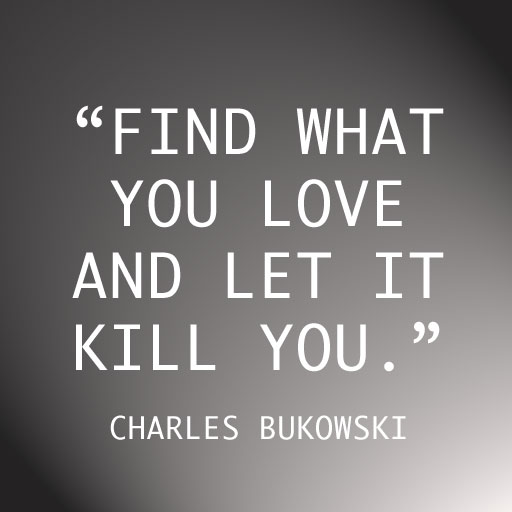 One of the hardest parts of growing up for me was realizing that I didn’t have anyone to look up to. As a child I brought my gaze to Amelia Earhart, and I wish I could sit here and hand you a list of famous (or infamous) people who have brought change into my life simply by existing–but that’s not the case.

As a child, Earhart was this glowing icon that out shined everyone else. My fan worship of her lasted all of elementary and part of middle school. By high school I donned the moniker of “realist” and stopped looking at other’s success to inspire me. There was no point. I could never find one.

Now, as an adult, it’s even harder to wrap my mind around the fantasy of an idol. I see people doing things people do. This lasted until I met Charles Bukowski on the pages of PULP. I could lie to you and say the first Bukowski novel I read was HAM ON RYE, but it wasn’t. It was PULP. His last book. It’s even from Black Sparrow Press. My one and only book (of his) from them.

On his grave stone it says, “Don’t Try.” I’ve seen it in person. Buried in San Pedro. Visiting his grave was one of the first things I did when I moved to LA. There was a 40 oz and lots of other crap sitting on his black polished surface.

I read it and laughed as I thought, “Screw You, Hank. Screw. You.”

Maybe you don’t like him. Maybe you think Miller was the “better writer.” Or maybe you’re attached to all the beat writers and wish you were on the road with Kerouac. I wish I was walking through Pershing Square talking to  Charles Bukowski about how cruel the world is–knowing it’s okay.

So, Happy Birthday, Charles Bukowski. I still plan on trying, regardless of what your epitaph tells me to do–because we both know you don’t mean it.